The humane management of these very large free-roaming dog populations is an area which has received more attention in recent times. There has been a realisation that elimination of the dogs whether by culling or other removal is ineffective because of increased survival and inward migration that quickly replaces the removed animals. WHO, FAO and OIE all support this position. Increasingly too the welfare of the dogs has received greater importance and many countries now appreciate that culling dogs is culturally inappropriate, encouraged, for example, by the advice of the International Companion Animal Management Coalition.

India, which has a large proportion of the world’s free-roaming or street dog population, has recognised that these dogs must be controlled. An estimated 20,000 people each year die of Rabies in India. India was the source of recent human cases occurring in people in Great Britain and Europe. In addition it is believed that 17 million Indians are bitten by dogs each year. Most of the victims are young, poor and male. The cost in suffering, fear, lost earnings and post bite treatments is enormous.

India has advocated humane dog control for many years by promoting the Animal Birth Control (ABC) concept developed initially in Madras (Chennai). Many such ABC programmes exist across India. including a programme run at the animal welfare charity Help in Suffering (HIS) in Jaipur, a city of 3.5 million souls in the desert state of Rajasthan. This programme was established in late1994 and, from the very beginning, amongst its aims has been the collection of data on the effects of such work on the street dog population and the associated public health problems.

Teams of three animal control officers, who are also veterinary nurses/technicians, catch dogs from the city in a systematic area-wise pattern. Dog catching in Jaipur is done with a large Hessian sack closed with a draw string of rope, though in other projects large ‘butterfly’ nets are used. Dogs caught in this way appear less stressed than those caught on catching poles etc. The simple equipment can also be made cheaply locally and is very hard to misuse were staff to be uncaring. Catching sacks have never been known to injure the caught dogs which rarely bark on capture and never defecate or urinate, unlike when caught with catching poles, nooses etc.

The animals are recorded as they are captured and transported back to the hospital in an jeep type vehicle. Once at the hospital the dogs are kennelled individually and given a quick veterinary inspection. Details of all animals caught are recorded in a specially designed Access database which, inter alia, generates the day’s operating list.  Once routine husbandry tasks are finished, all dogs on the ops list are sterilised, given an ear notched and rabies vaccine, and tattooed for identification. The bitches are spayed using a right flank incision and the males are castrated conventionally. Every day around 12 sterilisations (mostly bitches) are done in a surgical effort that takes 2-3 hours for the team of 1 or two veterinary surgeons and 4 technicians.  For details of the technique see Veterinary Record (2012), here. 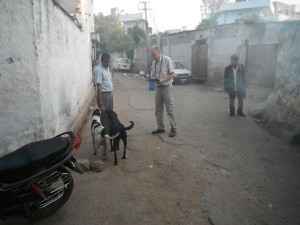 Every day vets involved in the programme examine every ABC dog. Animals in need of post operative treatment are noted and those which have recovered are marked for release. Treatments are given, and all animals receive a home-made diet twice daily (For economy this is fresh left over food from a 5-star hotel in the city and is a good mix of meat, vegetables, carbohydrates, eggs etc).  Throughout a dog’s stay records are maintained of what has been done to the animal and of anything else noteworthy. When released the dogs are returned to the location whence they came usually by the same team which caught them.

The HIS ABC programme is carefully monitored so that problems can be identified and corrected. A monthly report is produced which accounts for every dog in the system of which there are usually about 280 every month. The advent of the computer database has made both the clinical monitoring and that at the population level easier.  Twice yearly formal index of abundance surveys of free roaming dogs on the streets of a set area of the city are undertaken. This allows changes in the population and its composition to be noted (but not the total population) over time.

The latest survey (November 2015) suggests 88.9% of bitches in the city have been spayed and vaccinated and 69% of males vaccinated against rabies. Occasional other surveys are done, often by motorcycle, to monitor the situation throughout the city.  The database can also be used to answer questions on other aspects of the programme, dog diseases etc. With help from the late renowned Australian veterinary surgeon Dr John Holt, all historical data has been entered into the database which contains details of the programme back to 1996 and over 100,000 street dogs. From the records it has been possible to note that the Jaipur dogs breed only once a year with all breeding occurring in October to January. The average litter size is about 6 pups.

The records allow knowledge of the health of the dog population to be assessed. Around 2.1% of dogs caught are killed humanely because of serious pre-existing conditions which it is not possible to treat. This figure is artificially inflated as catching staff are encouraged to catch welfare cases whilst out catching ABC dogs. Mange, transmissible venereal tumours, and wounds exacerbated by myiasis caused by the old-world screwworm fly (Chrysomya bezziana) are the commonest conditions. The level of humane destruction amongst ABC dogs has dropped over the years from over 10% in the early years of the programme (despite near constant selection criteria) which may be an indication that the programme is helping make the city’s free-roaming dogs healthier.

Other recent work on disease exposure has suggested that the unsterilised dog population has become healthier as a result of having spayed companions in the population (see Yoak, A.J., Reece, J.F. et al.).  Of the human health effects it is more problematic since health records in India are notoriously unreliable. However, the data of the local large government hospital suggest that the number of human rabies cases has declined from around ten in the city every year before the ABC programme started to around zero.

Data from the local animal-bite department in the city’s main hospital suggest that the number of people suffering dog bites has dropped from about 6.5 per thousand of population at the start of the ABC work to under 2 per thousand now. One of the reasons for this may be because dog bites have been found to be seasonal mirroring the seasonality of street dog breeding; that is, biting behaviour is related to maternal behaviour.

The Jaipur ABC programme at Help in Suffering would thus appear to improve the major public health problems associated with large free-roaming street dog population at least in part, and the method could be used in other similar situations to improve human health and animal welfare.  Greater involvement of medical and municipal authorities would help to control these public health problems, as would increased professionalism and less emotion amongst the animal welfare groups undertaking the work.

The Help in Suffering ABC programme is funded by the Animal Welfare Board of India, and Dogs Trust. Volunteer veterinary surgeons are wanted. For more information on the work of Help in Suffering and to help please visit www.his-india.in

This blog is based on an article first published in the Veterinary Times, (U.K.) on August 21 2015. Jack Reece (B. Sc., B.V.Sc., M.R.C.V.S.) spent four years in practice in North Devon before taking up a voluntary position for six months at Help in Suffering Animal Shelter, in Jaipur, Rajasthan, India. He has been there since that time, apart from spells as a locum in the UK and as a temporary veterinary inspector during a foot-and-mouth disease campaign serving in Galashiels (UK). Jack’s responsibilities in Jaipur are for a street dog and rabies control programme, and an associate educational and research programme, but he’s also involved in the charity’s work with equines, camels, elephants and rescue animals.